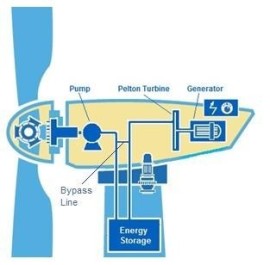 The Hydraulic Storage is mechanically connected to a wind turbine by means of a pump to the rotor and a hydraulic motor or a Pelton turbine to the generator. The rotor drives the pump to inject water into a gigantic hydraulic cylinder. The high pressure water lifts a heavy solid mass while it is getting accumulated in the underground borehole. The wind energy is therefore stored as high pressure water in form potential energy in the storage system.

The heavy solid mass comprises many cylindrical components which made of a steel shell filled with concrete. The stored high pressure water can be released through a nozzle for using the stored energy. The high pressure water jet spins the turbine and accordingly the generator to generate electricity.

A WT+HS which stores energy 6 hours during night and generates electricity 18 hours per day has the capacity factor of 18/24=75% unlike conventional wind turbine typical capacity factor of 35%. This reduces the capital cost of electrical component like generators, transformers, array cables, export cables, sub stations etc. As an example an offshore wind farm with 100x6MW turbines can be de-rated from 600MW to 280MW using WT+HS while the annual production is kept within similar rate (600MWx35%=280MWx75%).

WT+HS can even be more favourable for supplying of electricity to micro grids since a WT+HS can supply the electricity to a micro grid independent of the national grid. The generated electricity can be delivered directly to the consumers and the energy lost due to electricity transmission can be avoided.